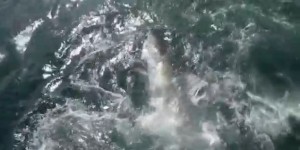 A little video of shark diving off Gansbaai, Western Cape. With John Nice and Dan Oakley, and a troop of infuriating American college students. Saw about ten different sharks and then told the story of a previous boat being knocked over by a freak wave and everyone being eaten. The main tourist attraction in Gansbaai since approximately 1995 has been cage diving with Great White sharks. It is said that after Kruger National Park, the Great White sharks attract some of the highest number of tourist to South Africa for any singular activity.

Husband, Father and impatient blogger. Further details on his Google Plus profile.
View all posts by Rob Laughton
Logging In...